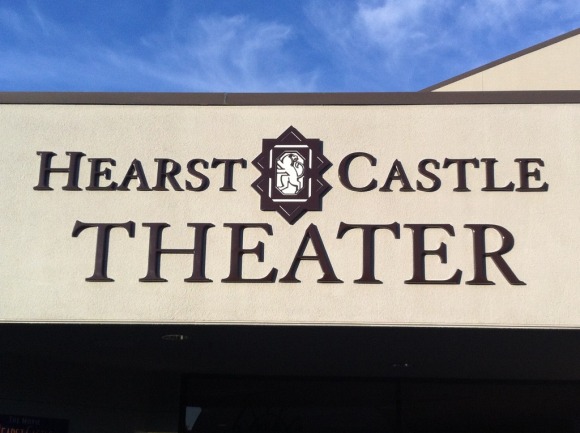 The sneak preview of CALIFORNIA FOREVER – Episodes One and Two in the theater at Hearst Castle April 24 was a huge success! 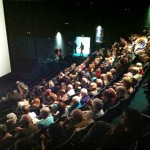 Nearly 250 people showed up, some from as far away as Orange County and San Francisco.  Hearst Winery kept the wine flowing and platters of Hearst Ranch beef skewers and cheese and vegetable delights were served in the lobby before audience members filed in to the 5 story big theater. Following a brief welcome by Nick Franco, superintendent of the San Luis Obispo Coast District of State Parks, Elizabeth Goldstein, Director of California State Parks Foundation gave a passionate introduction that placed the importance of the film inside the larger context of the urgent need for all of us to get active in preserving these places.

Episode One screened, and while technicians scurried to get Episode Two up and running, David and Sally took the stage to banter a bit in the interim.  They thanked some of the films’ “luminaries” in attendance, such as Bob Perkins of Destination Cinema, Hearst Theater owner and major funder of California Forever, Mike Kahn, from KQED, the programs’ PBS presenting station, Tony Humecke, composer, Christian White, editor and Amanda Frost, coordinator and production assistant.  Episode Two screened, followed by a brief Q&A.  But the evening did not end there – as an assortment landed at the only bar in town still open past 9:00 PM, to share a celebratory drink before turning in.

The tone of the evening was both celebratory – (it was the first time some crew members had seen the program) as well as thoughtful.  Many of the questions in the Q&A as well as discussions at the “after-party” were about what to do now, and how to engage people in the importance of parks that would not normally consider themselves typical “park supporters”.

Mary Golden, Executive Director of the Central Coast State Parks Association that co-sponsored the event was thrilled with its success and is already spearheading ways to use the film to engage audiences past the upcoming PBS broadcast.  To quote from her thank you letter to the filmmakers she wrote:

“Thank you for the beautiful film about our parks and the fight to preserve them for the generations coming.  The goals of the evening were two-fold: to educate people about our Parks and to fundraise.  We were able to net $6,500 from the event. This will allow us to continue serving our mission of promoting public awareness and stewardship of natural resources and cultural heritage, now, and for future generations.”

Following the achievement of the event, California Forever and the uncertainty that face parks was featured in a television news story on KSBY, the NBC affiliate in San Luis Obispo.  Watch the story here.